So I was talking to our DL and he encouraged me to post my story here.    5 years ago, I was diagnosed with testicular cancer and went through surgery and three months of chemo therapy. 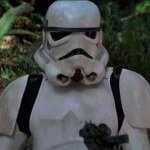 Update: I wore the armor tonight and I had room to spare. The last time I wore it the Velcro barely fit and today I had almost two inches to spare.   I am so happy that walking every day, cu

Well with the COVID-19, most of our April troops have been cancelled. I did try on the armor and it fit perfectly. I have lost almost 18 pounds and we keep it going. I think just limiting myself to on