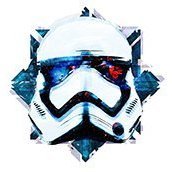 Hey everyone,  So no real progress has been made for the past week or two, but I have recieved my gloves and my belt pouches:   Gloves are from Endor Finders and the pouches are from Tro

Alright, not much done over the past couple of days, but I did fully attach the ab boxes to the abdomen:   Ab Boxes attached   One thing to note is that I saw (after taking th

Not much done today, worked on the spats, knees and the shins some:    Shins trimmed and sanded   Spats 1   Spats 2   Knees   All