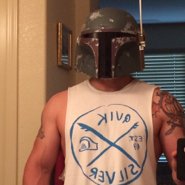 Hello Troopers,   First off, thanks to anyone checking out my build thread.  I'll preface this by saying this will be a marathon, not a sprint.  I'm not gonna give myself a timeframe, I'd ra

Affirmative sir!     If there were a top 10 of most common missed details on approvals, that would have to be near the top.  Along with fully painting ATA ab buttons to the edges.  I KNOW I'l

Next stop, bucket painting.  The main references I'm using as a guide are @CableGuy's ANH Stunt - helmet painting tips thread and linked YouTube vids (what a glorious helmet!) and starswarshelmets.com