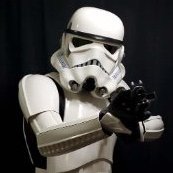 Hello all!   Longtime lurker, first time poster. After years of having the Anovos TK armor (pre-ordered from the original run), I'm thrilled to say I'm finally at a place to put it together.

Here is the wrist side of the forearm with the return edge removed. The protective film is still on the armor so that is why there is fuzziness around the edges (Definitely will make sure to remove pa

I am also happy to say that with the adjustments suggested by the folks above and my GML, I have been approved! *TK 71128*   Thank you all for your help and support! I couldn't have done it