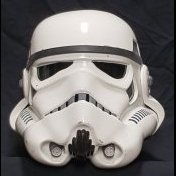 Hey no problem fellas   I checked out the RPB and I think all the posts have been deleted, but there are a couple on the ASAP board.   Basically I started in 1999 when I first looked at the studi

Kind of late to the party, but I also like to add.   I have built a RS suit (as a TD) and an ANH hero  set + a ESB bucket from Paul. Both are great kits and fun to work with, but I prefer Pa