Getting started on a remnants incinerator 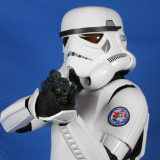 Some pictures of the progress made, gun is still in two parts though, I am not sure how to proceed because the contact surface is limited and the gun is very front heavy.   https://imgur.com

Boots received  They feel fantastic, and they have a zipper this time around. Thanks to vincent from IB for fixing the problem very fast.