Brattie's AP Build and Journey to The 501st 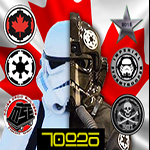 it's the little things in life that make me happy! Thanks Mark for pre-painting my AB buttons!

One down.. now just have to wait for my TK stuff to arrive and I'll start on it too!!!