Much as we've seen recently with the addition of a few new costumes, the discussion about these gleaming white additions to the Empire's storied lineage has been heating up.   As a result, this seems 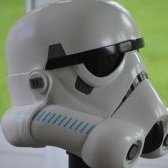 Here's what I've come up with so far.  I'll try to post some good reference shots asap.  Every time I look at the pics I see something new, so please call out anything as you see it!         Hel

You are all doing a lot of great and clearly passionate research on this costume, and that is appreciated on so many different levels.   I just wanted to take a few moments to chime in here to weigh