Haha, well, this is FISD...   Shannon really enjoys wearing the bucket.  The big nerd takes the bucket on vacations... she loves that damn thing. I have to change the damn fan batteries enough!  She

I'll have that thing green the moment that pic is online! I'd do it myself but it's a pain over lte from a phone. 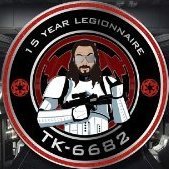