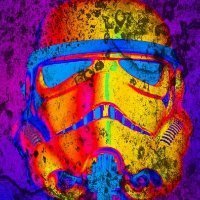 My transport box actually arrived, alongside my Holster, making it the fastest delivery of this build.    My new holster is the one by Darman and whilst it first seems heavier and bigger tha