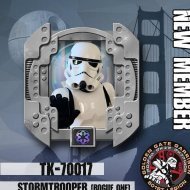 By DarthBiscuit,
April 20, 2020 in Rogue One Build Threads

Little Brown Box day!!     Big thanks to @jimmiroquai for quick production and shipment, despite the COVID checkpoints!!   First step: wash and scrub with scour

I did it!!     I gotta tell you, I'm also finishing up my master's degree right now. I just submitted the initial draft of my thesis to my advisors. BUT...receiving my approval to

Wet sanded all the putty to 220 today. Most of it went fine, except the oval spot had a few pinholes. Filled them up and set it all aside.     Tomorrow I plan on spraying satin whi