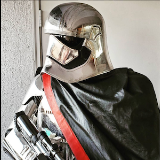 Tightened up the belt and abdomen section. The velcro attachment worked out easily for placement. The makeshift harness for the thighs did a good job as well. It kept the thighs up at a reasonable hei

Can't stop won't stop! The cancelled Star Wars Celebration weekend approaches.    I believe I mentioned in the early stages of the build that the thigh armor was too small and I was hoping t