Some of our own in the new Mandalorian TV show??!!! 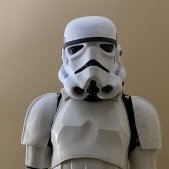 The best thing from this is how nice everyone was from the bottom to the top. Jon Favreau hit the nail on the head at the Mandalorian panel when he said he didn't know we knew nothing about why we wer

The vibe I have been getting is a solid no. The 501st troopers on set and their personal armor will likely be counted as unique, a la "Mr. NoStripes" and will not change the current ANH-S CRL in any w

I've got everyone's names & that's in the works.... ssshhhh