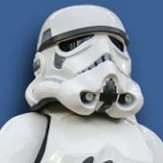 Here I go with my official RS Props TK build for the Vertically Challenged (also known as This TK Comes in a Fun Size). For those of you interested, I am 5'4" and 108 lbs.  This is my very first armor

I said it would be converted in a few months.  Well, other projects got in the way, and life, too...  so it actually took a little over 2 years to complete, but this kit is now officially a Sandtroope