Hello everyone,   I don't post nearly as much as I should or used to but I felt I would I would be remiss in my duties not to write a review for this armor. I know alot of folks are either o 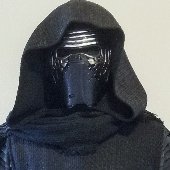 I received my Armor from Jim , and all is true, it is fantastic, I was super concerned with painting and cracking because of it's flexibility, I had worries of having to have an auto Paint shop spray